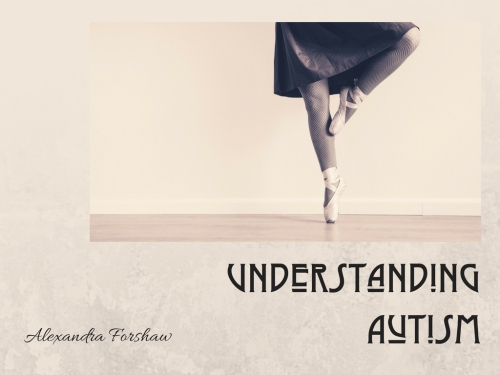 This is based on a presentation I gave to colleagues where I work today titled Understanding Autism. Although not a transcript, the text here is based on my detailed speaker’s notes.

Apologies in advance for the rough editing I performed to put it into the shape you see here, but I didn’t want to spend all night polishing it. So without further ado, here we go! 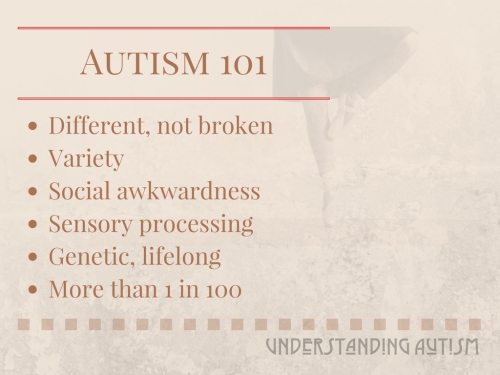 I’ll start with brief description of what autism is.

It’s a developmental condition, a neurological difference. The brain’s wired differently, works a bit differently. I don’t refer to it as a “disorder”: current practice has moved on from that view of being “damaged” and now many see it as part of the normal range of human diversity. Neurodiversity. Diagnostic manuals like ICD-10 and DSM 5 have yet to catch up.

Most autistic people prefer to be called autistic, rather than described as “having” autism or being someone “with” autism. It’s a significant part of who we are, you can’t separate out the autism.

Key traits include difficulty with social interaction. It’s hard to understand other people because they don’t think the same way: growing up you see people around you managing it and it seems like some kind of magical telepathy. It takes time and effort to learn how to do it. Goes both ways: hard for NTs to read autistic folks too, but there’s more NTs! It’s hard to learn the rules for it.

Autistic people commonly have very strong interests – almost obsessive (sometimes referred to as “special interests” although I dislike that term). Like a fanatical supporter of a football team who knows all the players and stats.

Also sensory processing issues – many are over- or under-sensitive across one or more senses, so may have trouble with bright lights or loud noises, scratchy fabrics. Stimming (self stimulation) can be used to regulate sensory input (rocking, tapping feet, twirling hair, fidget spinners, etc).

Other traits include echolalia (or palilalia), scripting (use of a stock phrase in a particular situation – may have no obvious connection to that situation except that it once happened and kind of stuck).

It’s genetic which means it’s heritable so it runs in families. It’s lifelong: you’re born that way, like being dyslexic or left-handed. So it doesn’t “go away”, you just get better at coping with the obstacles it puts in your way. In the UK more than 1 in 100 people are autistic, in the USA the CDC report 1 in 68 (although there’s some pressure there to diagnose so people are covered under health insurance). Between 2-4 times as many males as females, but at least some of that probably reflects bias in diagnosis: the early research involved autistic boys. 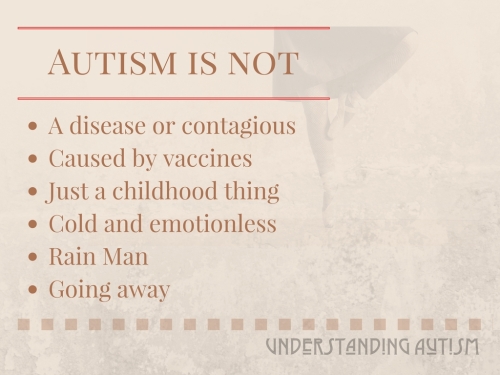 There are a lot of misconceptions and myths about autism and autistic people.

It’s not caused by vaccines. If you remember all the stuff about MMR, that has no basis in fact. The GMC struck-off Andrew Wakefield, his research paper was retracted by the BMJ because it was fraudulent. He had a conflict of interests: an undeclared financial interest in an alternative to the combined MMR vaccine, and falsified results. Since then there have been hundreds of studies involving over a million people and they have all found no evidence of any link.

It’s lifelong, you don’t grow out of it. Autistic children become autistic adults, they don’t disappear. But social services often stop at 18, and provision for adults is sorely lacking.

Autistic people do have a reputation for being cold and emotionless. Like Mr. Spock in Star Trek – Vulcan, all logic, no emotion. The truth is many of us are highly emotional, it’s just that we: 1) don’t show it in the same ways, and 2) often have difficulty identifying and describing how we feel (alexithymia). We also do have a sense of humour, but like us it’s autistic and prefers to avoid crowds.

And I have to mention Rain Man. Everyone thinks of Dustin Hoffman’s character, Raymond. (In fact the character was largely based on Kim Peek who was a savant but not autistic.) Savants are uncommon – most autistic people fall within normal (as in average) ranges for cognitive abilities. And we’re not all brilliant at maths or computers (although some are – I’m too modest to suggest that applies to myself). We’re also well represented in the arts – I have a number of autistic friends who are professional artists or writers.

Some medical conditions are common among autistic people – doctors refer to them as “co-morbid” conditions which sounds somewhat ominous.

Gasto-intestinal issues, IBS, acid reflux. A significant number of autistic people have some food intolerances. Some of these issues can be stress-related – stress and anxiety are very common, not least because of the obstacles we face.

Ehler Danlos Syndrome is a genetic condition affecting connective tissues which can lead to joint hypermobility or fragile skin. In some cases it can affect mobility via unstable or painful joints, and can be prone to dislocations. EDS can also increase the risk of hernia or prolapse.

Epilepsy is a condition affecting the brain leading to seizures. These may be anything from strange sensations or appearing unresponsive, up to the “classic” fit with uncontrollable jerking and shaking. Seizures can be triggered by stress, lack of sleep or other factors, and can cause injury, damage to the brain, or even death.

Synaesthesia – kind of like cross-talk between different senses. For me “A” is bright red while “S” is green. I also get visual responses to some sounds. For a friend of mine the number 8 is “shifty”.

Any parents here will be familiar with developmental milestones: when a child starts sitting up, crawling, walking, talking and so on. Autism, being a developmental condition, is often identified after around 2.5 – 3 years when development slips against the “standard” milestones. Not to put too fine a point on it, those are milestones for allistic (non-autistic) development. Autistic children develop according to their own timescales.

The phrase “special interests” is used to refer to the sometimes all-consuming hobbies that many autistic children pick up. Many children have interests that border on the obsessive – think of walls covered with Take That or Westlife posters (I’m probably showing my age). My walls: maps. It’s often more the subject of the interest that stands out – it’s often not mainstream.

School brings its own challenges, many of them social. I would say the majority of my autistic friends were bullied because they didn’t fit in: they were the weird kid who didn’t have many friends (if at all). But also the school environment can bring sensory challenges. Noise, lighting. Being forced not to stim (often seen as distracting, or not paying attention when in fact it helps us to focus), to make eye contact (many autistic people find that uncomfortable).

The social aspect is one of the most challenging. How to interact with other people seems to be something that comes instinctively to NTs. We… could really use an instruction manual. Something to spell out all the unspoken rules.

The other thing is that social interaction is tiring. Most of us need a certain amount of it – we are human beings, social animals. But we also need down time, time out on our own. I was perfectly happy playing on my own for hour after hour as a child, with just the occasional activity involving others.

There’s a growing number of parents of autistic children choosing to home school these days – it often works well because of the much greater flexibility. It’s certainly something to consider if you have an autistic child who’s struggling with the conventional school environment.

I mentioned home schooling which is one way to better accommodate the needs of some autistic children. Accommodations are the key, really: many of the aspects of autism that create obstacles can be alleviated by adapting the environment. It’s like any other disability in that respect. We need access to the same things as anybody else, but when the world is shaped for NT needs it’s harder for us to make our way.

Some things that can be done fairly easily and cheaply: variable lighting, quiet spaces, “Do not disturb” indicators. Headphones, perhaps noise-cancelling – it depends on the person’s needs. The ability to attend meetings “virtually” rather than having to be physically in the room with many other people.

It’s also important to be flexible with communication. Many autistic people are not comfortable using the phone so offer alternatives such as IM/webchat, email. Some are non-speaking or find speech difficult at times, so don’t rely entirely on voice-based communication. There are a number of companies out there who you can only get in contact with via the phone – think of taxi firms, take-aways: businesses you might want to use regularly – but also some big corporations too.

Mentoring can be very effective for autistic people – that kind of focused, one-to-one or small group-based personal development. The thing is, a lot of us are really bad at asking for what we need, and it takes patience and the establishment of trust before we can start to ask for things we need. Providing a mentor or some other single point of contact helps with building that kind of connection.

Autism is still viewed negatively by a lot of people – parents especially fear what it might mean for their child. And I’m not going to stand here and tell you it’s all wonderful because it can be very challenging. Autistic children sometimes require a lot of attention and it can be difficult to learn how to communicate with them effectively, how to tell when something is distressing them or making them feel uncomfortable when they might well not be able to express it directly. But increasingly there are resources out there offering help and advice.

I and other autistic advocates push for increased acceptance of autism. There are any number of “awareness” campaigns – you’ve probably heard about autism in the media. But awareness just means that people have heard the name. Unless they research it themselves they don’t learn what it is and don’t end up understanding it. And to be honest the people who understand it best are people, like me, who are autistic. Even doctors and researchers who have been in the field for years don’t have the insight that you get from actually experiencing it every day. We push for acceptance, to be recognised and included as autistic people, and not forced to mimic NTs. Most autistic adults, myself included, mask our autism to some degree because we’ve had to fit in to be accepted. But it takes effort to do that: it can be exhausting, so we don’t want the next generation to have to endure it.