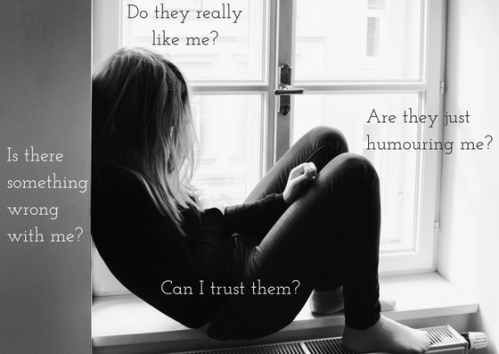 When you’re autistic you get used to being let down, to having your hopes dashed. You start out believing what people tell you, taking their words at face value because you can’t judge accurately how sincere they are and aren’t often aware when something is only a social convention and not meant literally.

Growing up, we autistics initially presume that our relationships with others are reciprocated as strongly as we imagine them to be. It gives us false expectations in our interactions with non-autistic people and means we get disappointed all too often when plans fail to materialise or fall through.

We do learn from our experiences. What we learn is that as much as we care for others, they often merely pay us lip service. They tell us they are our friends but they don’t show it: we don’t get included the way their other, “real” friends do.

It colours our perceptions in all our relationships. We see the qualitative difference between our friendships and those of others. And because we are the common factor in all of them, we deduce that we are the cause.

Being autistic we notice that we’re different from our peers. We are aware that we don’t really fit in and we get used to being treated differently. We take it to mean there’s something wrong with us and that nobody is being entirely honest when they say they’re our friend.

We can be fine when we’re with them and interacting: everything seems okay in the moment. But afterwards doubt starts to creep in. “Can I trust them?” “Do they really like me?” “Are they just being friendly out of pity?”

We fear that if we question them, assert ourselves, they will abandon us. Better a superficial relationship than none at all. So we go along with their wishes and keep our own to ourselves. Because we fear being isolated and lonely.

It’s frightening at first as you slowly, gradually open up and establish trust. As you begin to accept that here is somebody who is not going to hurt or take advantage of you. The self-doubt and insecurity lingers. You want to believe them, but can it really be true?

There’s a saying, “Once bitten, twice shy.” Well, when you’ve been bitten as many times as the average autistic, you’ll be so shy that you despair of ever letting go. It takes so much reassurance, so much careful establishment of trust. It takes candour and openness. Honesty. Sincerity. Truth. It takes time and patience.

But equally it takes understanding and empathy that goes both ways. Now, I’m not saying it’s impossible to achieve that when one of you is non-autistic but it does make it a lot harder to empathise without the insight that comes from personal experience.

After many years of unequal, one-sided friendships it is very hard to accept when you get to know somebody who treats you as an equal partner in the relationship. Who validates and respects your feelings and needs. Who makes you feel whole instead of broken.

But it is so worth it.

6 thoughts on “Is There Anybody Out There? – Insecurity”