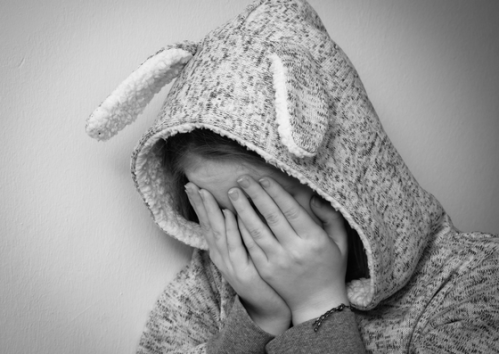 A Facebook post earlier got me thinking about the effort we expend in passing as non-autistic. The lengths we go to to conform. And what that costs us.

Passing is a term deriving from the phrase to pass for, as in being accepted as something you’re not. In this case it’s when an autistic person isn’t seen as autistic, when the typical, instinctive behaviours are successfully masked.

It’s acting, mimicking the behaviours of the people we see around us so that we don’t stand out. We’re playing a part, assuming a character, portraying a role. We’re hiding.

What do you hide?

The specific details vary from person to person, but essentially we hide those behaviours that non-autistic people don’t display.

The obvious one is stimming, often repetitive movements that we use to help regulate our sensory processing. This may involve rocking, tapping fingers, manipulating objects in our hands or mouths–a whole range of actions.

Still other behaviours are sensory-seeking, where we take comfort from particular physical sensations. That might be a weighted blanket, particular sounds or lighting, the smell or feel of an object: anything that stimulates one of more senses in a specific way.

And there is the flip-side: sensory avoiding. Some sensations such as bright or flickering lighting, loud or sudden noises, particular textures, being too hot or cold, and more can cause a reaction from discomfort to acute distress and physical pain.

Many of us script: that is to say we have a set of stock phrases that we like to use in certain situations. They might come from TV, films or books, other people, or they might simply be expressions we have used once that kind of stuck.

And then there is echolalia (and the related palilalia) where we repeat words or phrases that we hear (or say ourselves) over and over involuntarily.

This is one of the classic traits of autism: being socially awkward. While many of the other behaviours can be suppressed with effort, interacting with other people socially means learning skills that don’t always feel comfortable or natural.

And that’s if we’re able to learn them well enough to become fluent. The barriers may simply be too high.

If you’re thinking that sounds like a lot, you’re right. Some autistic people find it easier than others, just as some people have an innate talent for drawing or dancing. But unlike a hobby or even a career we have to put the effort in every waking hour of every day.

Yes, as with anything that’s practised constantly, we can become very skilled at hiding how we really are. Many of us have heard the refrain, “But you don’t look autistic” in response to telling people that we are. Could you just not?

Being skilled at something does not mean it’s effortless. It might look effortless, but that’s the result of many years of experience and practice. Like a prima ballerina, we put so many years of training, so much effort into making it appear fluent and natural, flawless.

It’s exhausting. And what makes it harder is that many of our instinctive behaviours are things that help us cope better. Stimming reduces sensory overload, reduces our stress and anxiety. Many other behaviours either help us cope or are ways we communicate, like an autistic body language.

So why bother passing?

In a word, safety. We go to these extreme lengths, make this huge effort so that we don’t stand out. Because we get taught over and over that standing out, not fitting in, gets us hurt.

Most of us have been bullied, anything from taunting and name-calling to beatings that nearly killed us. A few have been murdered simply because they were different, because they didn’t act like everyone around them.

Many others have been abused, emotionally and/or physically, to force them to behave in ways that are deemed acceptable. There’s a whole industry of so-called “therapies” like ABA that use one or another form of coercion to supplant innate behaviours with more socially-appropriate ones.

We learn that being openly autistic is unacceptable and will be punished. Wouldn’t you also try to conform in the face of such threats?

The good news is that you can do something to help any autistic people you might come into contact with. It’s called acceptance.

We do things our own way because our minds work a little differently. We can come across as unusual because we act and react differently to the way you would. We don’t behave as you would expect.

But that doesn’t mean our ways are wrong. Just different. So don’t judge us, don’t fear us, and at least try to understand us. But even if you can’t understand you can give us the space to be ourselves. Accept that we are different.

And if we feel accepted we can being to trust you, we can begin to conquer the deep fear that inhibits our instinctive autistic behaviours. We can begin to relax a little, expend less energy on maintaining the mask the whole time.

And that all begins with acceptance.

15 thoughts on “#Autism Eclipse – The Dark Side of Passing”