My representative
Is a faceless man in a suit.
I didn’t vote for him,
I don’t support his party,
Or their policies.

So I sit here wondering
How can I feel represented?
How can my voice be heard?
Who looks out for my interests?
Who understands my life?

Every cross I mark on a ballot
Falls unseen
Into a bottomless pit.
No sound, no ripples
As if it never existed.

I often look through my old school reports. It’s been difficult the last couple of years because they all talk about Ben and refer to that boy, someone who, although it used to be me I no longer recognize.

I recognize the words and know they refer to me, but whenever I read that name or those male pronouns I feel a cognitive dissonance. It was me, but at the same time (and strongly) it is not me. Not the person I am now.

And yet… I still open that old folder and read those words. 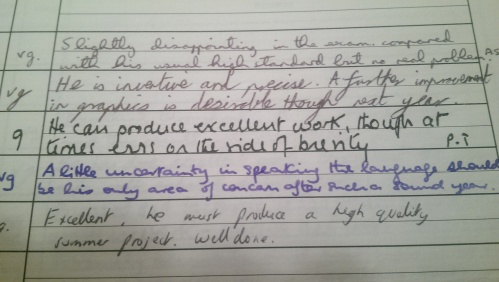 The subjects (from top to bottom) were Chemistry, Design, English, French and Geography.

I can’t emphasize enough how hard it is to read “he” and “his”, or to see “B” or “Ben”. Imagine reading something about you that refers to you as someone else. Not only that, but someone of a different gender!

I know these reports are mine, I know they are referring to me, but I’m a woman called Alexandra; these reports about some boy called Benjamin feel emotionally like they’re about someone else although I know rationally that they refer to me.

I’ve had conflicted thoughts about my daughter. I know she has a mother and a father, but I am not comfortable describing  myself as her father. I’m one of her two parents, sure, but I can’t bring myself to think of myself in such male terms as a father.

She calls me Alex, not “Dad”, which I’m happy about: I feel very uncomfortable with the male implications of father but I also recognize that I am not her mother. There’s a word missing from English, one to describe a female parent who did not give birth to the child.

To say it hurts is such an understatement. It tears my heart to pieces, leaves me crushed and beaten. I tell people she’s my daughter but I feel inhibited from saying that I’m her “parent” because I can’t say I’m her mother and I don’t believe “father” is appropriate.

Technically speaking I am her father, but emotionally I can’t accept that label. I can’t accept anything that suggests a male identity I don’t identify with. It’s frustrating, but I can’t find an answer to my conundrum.