The Brain Dancing Festival, a celebration of creativity in autism, is a series of creative events in Oxford, organised by the charity Autism Family Support Oxfordshire. An important part of it is the art exhibition at The North Wall which continues until the 2nd of April.

Neurodiversity can be thought of as brains dancing to different tunes, each of us with our own personal rhythm driving the pulse of our lives. It’s a celebration of the richness of difference, an acceptance of the value this adds to all our lives.

As an autistic woman myself I am committed to the goals of the neurodiversity movement, in particular the idea that everybody has something to offer, that our very differences are a source of creative potential.

So it was with a great sense of excitement that I accepted an invitation to attend the private viewing of Brain Dancing, an exhibition featuring works by artists either on the autism spectrum or having family connections to somebody autistic.

I’d never experienced a private viewing before so I had little idea what to expect. I’d seen several TV and movie scenes resembling cocktail parties that people attended to be seen but something told me reality would be somewhat different. 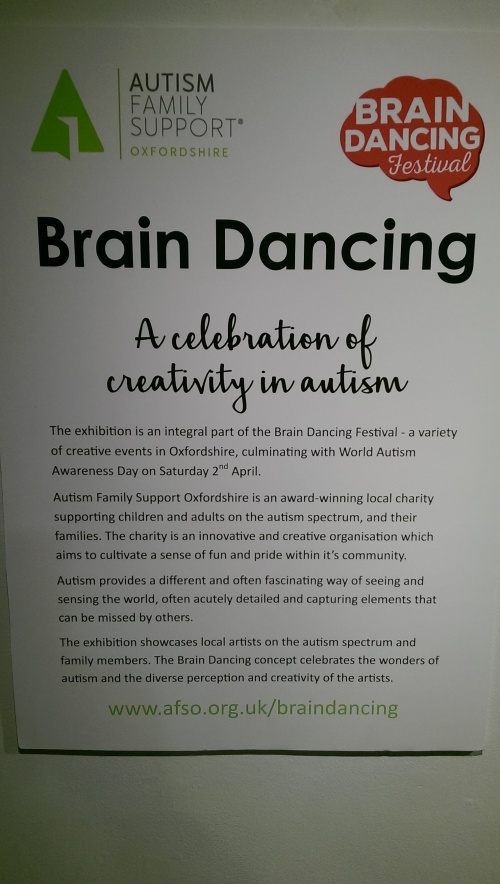 I arrived a little late, a result of the combination of parking the wrong side of the city and the bus services being disrupted by a traffic accident-related road closure. Walking in through the door I was greeted by the welcome sight of man bearing a tray of drinks.

I looked around; I was glad to see that my decision to dress casually fit in with the relaxed atmosphere. There were probably between 40 and 50 people there, most of whom I didn’t know, but I found myself by happy accident standing next to someone familiar, Stu Allsopp. I said hello and we chatted easily for a few minutes between the introductory talk by Gita Lobo, manager of the exhibition’s organiser, local charity Autism Family Support Oxfordshire, before a video presentation started.

After a brief fight against the technology we were treated to a short film that described the work of the charity and showed a few of the children and families being helped. It was a strong, clear message of respect and acceptance, providing support to young autistic people and their families to help them fulfill their potential.

I had realised while watching the film that I was standing directly behind my good friend, participating artist and curator of the exhibition, the wonderful Sonia Boué who had tended the invitation to me.

She told me I had missed meeting her fellow artists from Magdalen Road Studio, Katie Taylor and Kate Hammersley, who had been looking forward to seeing me; it was lovely to hear that people had been keen to meet me but disappointing that I’d not got there early enough to see them. But as compensation I did receive an invitation to the private viewing of Kate Hammersley’s upcoming exhibition at Wolfson College.

And so to the exhibition itself, a varied sampling of artistic expression demonstrating the creative influence of autism. I decided to work my way around the exhibits starting by the door where I had come in. After all, having a structure to activities is reassuring. 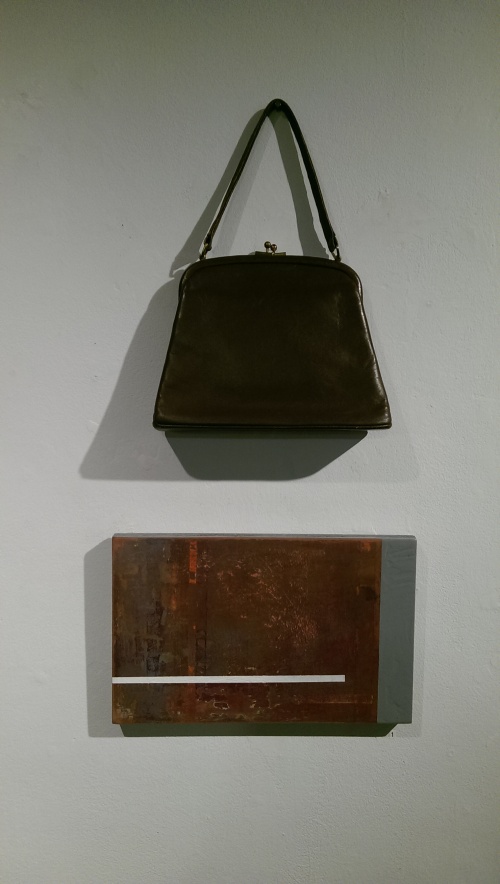 I began with Sonia’s works. First was the iconic handbag recalling Barcelona in a Bag above a painting titled Departure, a multi-layered and fascinatingly-textured painting: I spent some time examining it closely, becoming lost in the minute detail of its strata. I found myself wanting to touch it and experience the different textures more directly. 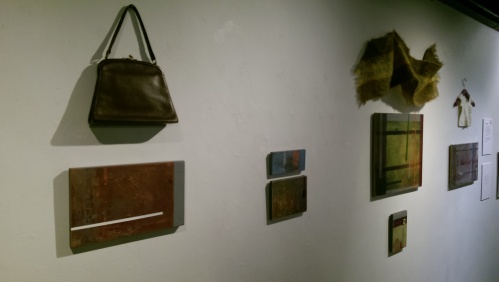 As I moved on through her pieces I felt drawn into a narrative: the sense of depth and history left behind in Departure, through exodus and exile–destierro–via internment and subsistence living to a new beginning and new life in a new land.

Next were a selection of beautifully observed landscapes by Rosalyn Goh. I was especially attracted to one featuring a river flowing between tree-lined banks, the sun glittering off the disturbed water as it rounded a bend. 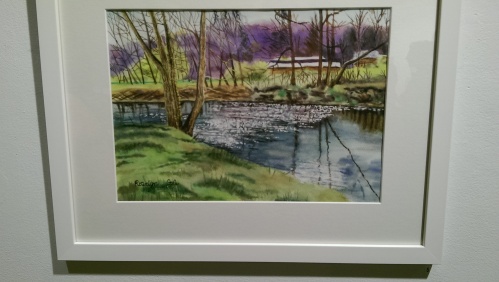 She captures the essence of the water so well. There is something exquisitely tranquil about her paintings. They capture scenes that you can imagine yourself in, encountering such perfect moments during a walk through the countryside. 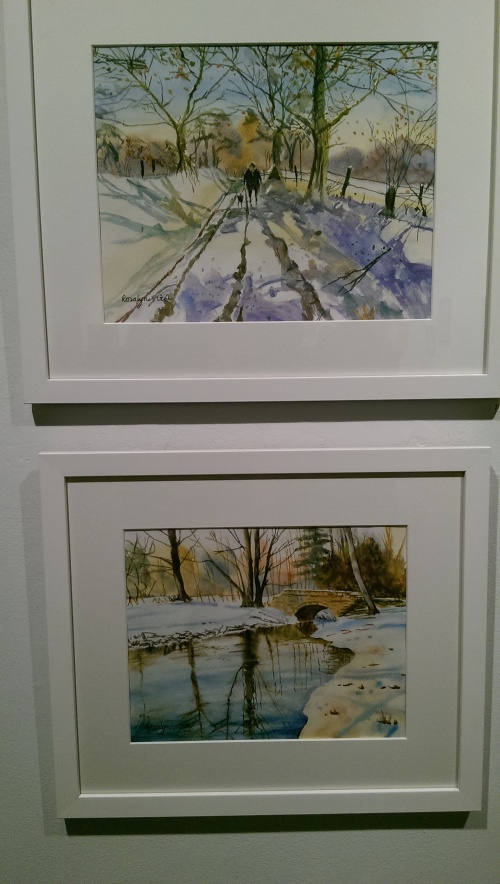 The third artist, Janet Millikin, showed works in two very different styles: bold, abstract works alongside intricate geometrical drawings reminiscent of technical drawings. Looking closely at the abstract pieces it was apparent that the inked intricacy was common throughout. 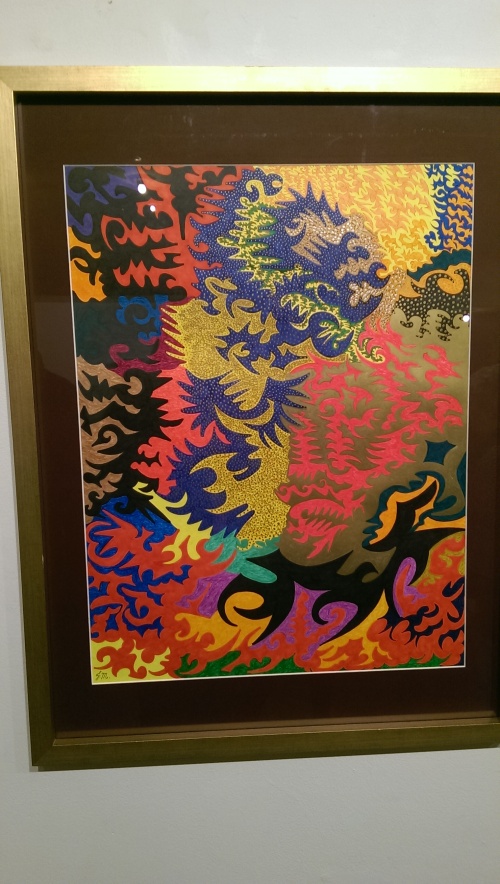 I found myself staring long at the picture above, enjoying the way that the shapes and colours inspired dragons and other fantastic beasts, emerging like cloud-beasts. There’s an intriguing contradiction between harmony and aggression; a softness with hard, sharp edges.

Continuing on my circuit of the room I next came to a set of photographic prints on canvas by Richard Maguire whose work I had encountered before online. He has a great eye for composition as well as a sympathy for his subjects that brings out unexpected impressions.

I am particularly drawn to water and the play of light in reflection and refraction; two of his photographs featured scenes with water and I was captivated by my exploration of the elemental nature of the scenes.

The next course in my feast was Tom Eyre and a varied set of works including an ocular pumpkin in a simple style of embellished line drawing, a sculpted wolf mask that evoked friendly play rather than ferocity, and an abstract swirl of colour.

It was this last painting that I felt the strongest reaction to. It could have been a Dante-inspired scene of souls carried within a storm of fire, or the noise, heat and raw emotion at the heart of battle: I sensed powerful turmoil in its chaos. 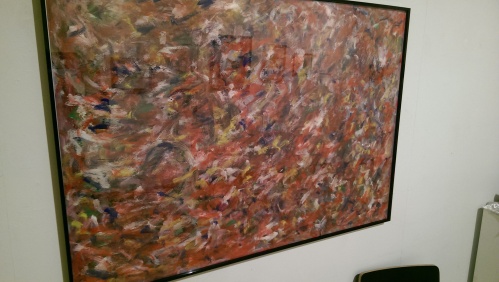 Finally I came to two display cases containing jewelry crafted by Joanne Turner. I’m drawn magpie-like to anything shiny and these pieces were a delight. The delicate patterning of the surfaces of the links in her chains reflected from the spotlights as I moved my head, almost hypnotic. 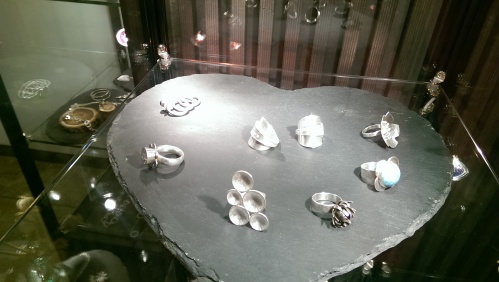 There was an organic feel to the various works, accentuated by the slate plinths and occasional simple wooden blocks. Deceptively simple in form, they held a depth of character in their surface textures; rather than being polished to a mirror finish they revealed subtle patterns hammered lightly into the metal. 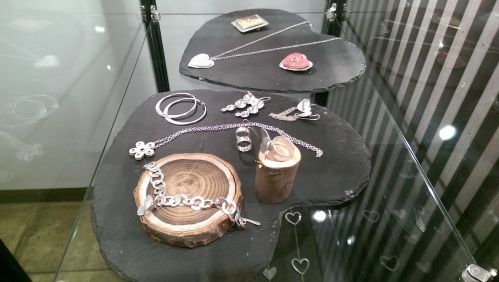 Overall it was a wonderful evening. Between the pleasure of meeting friends again, the stimulating conversation and my enjoyment of the artworks on show it was a most successful viewing, and I cannot thank Gita and the other organisers enough. I highly recommend this exhibition, and would urge you to visit the charity’s website (link at the top of this blog) to find out all about the work they do.