How do you answer when somebody asks how you are?

Me, I just say “I’m grand” and leave it at that. It’s not that I never feel fine, but even when I’m feeling down I don’t like anybody to know it. I’ve always been a private person, keeping things to myself and it’s hard to break the habits of a lifetime. Of course it’s become habit because I find it so difficult to talk about my feelings.

It would be nice occasionally to have somebody to listen to me while I struggle to describe how I’m feeling but I’ve found that two things get in the way. Firstly I have to trust the person completely before I’m able to open up at all. Secondly they have to have the patience to let me take my time explaining.

I’ve found it can be easier to just write things down: I started writing an occasional journal in my mid-teens but kept it private. I did find it a help to put down how I felt in writing because I didn’t get the mental block nearly as much as when I try to talk about it. I have a ritual that has evolved over the years: I write longhand in a particular notebook by candlelight. I have always found the act of writing about my feelings to be ultimately cathartic but it is emotionally tiring at the time. It is as if I have taken some of the pain out of myself and put it away in my notebook. It still exists but it’s outside me. As this might suggest, depression or hurt is my main trigger for writing. I hardly ever write when I’m up because there’s no need to.

I can’t always find the time to be alone and write about how I feel, and when that happens the hurt remains inside me. The danger is that I have no other release for it until I shut down or suffer a meltdown. I find a shutdown is exhausting, not to mention the disruptive effect it has on my day-to-day life and relationships. So I think perhaps I ought to try to find somebody to talk to instead. Sounds simple, doesn’t it? If only it were that easy to form the kind of relationship where I can trust somebody to the necessary degree. Although I know plenty of people well enough to no longer feel uneasy in their company, I have never learned how to move the relationship to a closer level, so I never feel that I can impose on somebody by asking them to do something that personal for me.

So that’s why I expect I’ll just carry on saying “I’m fine” and keeping the hurt locked away inside until I find time to take it out and preserve it in my notebook like a pressed flower. 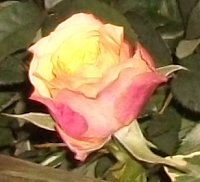